Utah 102, L.A. Lakers 81 Ronnie Brewer scored 10 of his 18 points in the third quarter, and five of his Utah Jazz teammates also scored in double digits in a 102-81 rout of the Los Angeles Lakers on Tuesday night at Honda Center. Kobe Bryant played 28 minutes and scored a team-high 15 points on 4-for-16 shooting — including an airball from the top of the 3-point arc with 1:52 left in the third and Los Angeles trailing 72-54. The two-time defending NBA scoring champ missed his first eight field goal attempts before ending the drought on a 16-footer with 4:08 left in the first half. He sat out the fourth quarter. Reserve guard Ronnie Pierce, who spent the first three quarters on the Utah bench, drained a pair of 3-point shots 43 seconds apart to help the Jazz increase an 11-point lead to 88-71 with 7:42 remaining. He added a soaring slam dunk at the end of a fast break to give them a 19-point cushion with 4:54 left, and Los Angeles got no closer.

Missing Lamor Odom following offseason shoulder surgery and Luke Walton because of a right hip strain, the Lakers made only three of 19 shots in the first quarter. Utah raced out to a 26-6 lead while forcing the Lakers into five turnovers in a 2:16 span. They finished with 28 turnovers, which Utah converted into 28 points. The Jazz led 54-33 at halftime, with 18 of their 21 baskets coming off assists. Deron Williams had six of them, including an alley-oop pass that set up a slam dunk by Millsap and gave the Jazz a 42-24 lead with 7:53 left in the second quarter. The teams had a rematch scheduled for Thursday night at San Diego, but that game was canceled because of the devastation caused by wind-whipped fires that forced at least 346,000 homes in San Diego County to be evacuated. The announcement was made in a release handed out on press row just before the final horn. Before the game, Lakers coach Phil Jackson told reporters that he didn’t support going to San Diego. “It’s a city that’s obviously depressed and recovering, and people are limiting things they have to do,” Jackson said. “They’re asking people to limit their outdoor activity, and they’re also talking about resources. So there are considerations there. I understand that the mayor lately has asked people to stay at home and hunker down underneath this thing until it passes.” 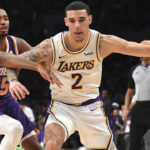 Next Story:
Lakers’ Farmar impresses with his solid improvement